Koko
1A Camden High Street
London
NW1 7JE
0844 4771000
koko.uk.com
The Brazilian MPB star – and Grammy Award Winner – is back in London for the first time since she sold out Koko in 2009 debuting her unique mix of Brazilian rhythms with pop and reggae. This time Vanessa presents a special show titled Caixinha de Música (Music Box) where she performs new compositions alongside some of her biggest hits.
Celebrating sixteen years of a prolific career, Vanessa da Mata includes three new songs in her set: Caixinha de Música, Orgulho e Nada Mais and Gente Feliz. Recorded live in São Paulo last year and released as a CD and DVD to enormous success, it is her most recent work since the intimate project Delicadeza, released in 2014.
Caixinha de Música sees Vanessa at her best showcasing some of her biggest hits, including the world-wide success Boa Sorte/Good Luck, the duet with Ben Harper, as well as some interesting cover versions such as Joy Division’s Love Will Tear us Apart, and also Brazilian classics like Mágoas de Caboclo by Orlando Silva and Vá Pro Inferno com Seu Amor, from country duo Milionário e José Rico.
Also included in the London show will be her own hits such as Ai, Ai, Amado, Não Me Deixe Só and Ainda Bem. A great return to the Capital from one of the biggest stars of the new MPB scene.

Born in Mato Grosso, Vanessa da Mata is a Latin Grammy Award-winning Brazilian singer songwritter. She made her debut with Vanessa da Mata, released in 2002. This first album included hits such as Não me Deixe Só and A Força Que Nunca Seca, written by her with Chico Cesar and recorded by Maria Bethânia, sister of Caetano Veloso and one of the most important singers in Brazil. Her second album was Essa Boneca Tem Manual.

Vanessa’s mix of pop, reggae and Brazilian music has made her a huge success, especially her tracks Ainda Bem, Vermelho and Ai, Ai, Ai, her first number one hit in Brazil. In 2007 she released her third studio album, Sim, and her name reached the international circuit with Boa Sorte/Good Luck, a duet with American star Ben Harper. Amado and Boa Sortewere both number-one hits in Brazil. Her other albums are Bicicletas, Bolos e Outras Alegrias and Vanessa da Mata Canta Tom Jobim – a special tribute to one of the most important Brazilian songwriters, Tom Jobim.

With support from TAP 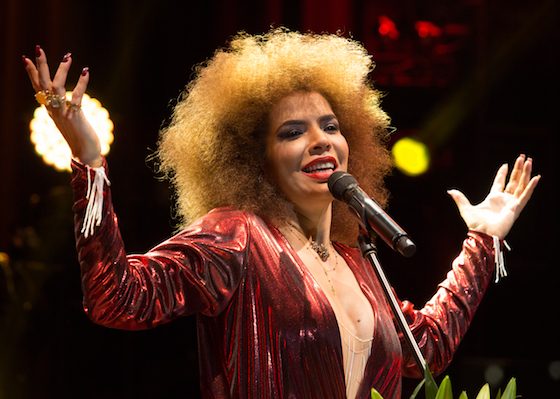