In the late seventies and early eighties a band from London called to the Latin world and now that world is answering back. The Clash of Joe Strummer, Mick Jones, Paul Simenon and Topper Headon had a huge influence on a generation of musicians in the Spanish speaking world through their sound, attitude and internationalism. From Buenos Aires to Barcelona via all the urban centres in between. Tonight’s special show features Clash repertoire reinterpreted through a Latin filter and the sound that finally came back from the faraway towns.

Among many guest stars will be:

*Amparo Sanchez of Amparanoia, winner of a BBC Radio 3 Award for World music in 2005

* Moyenei, a stunning Mexico-based singer of Reggaeton and Dance Hall.

Also featuring a 15-piece band, this special show is being assembled by producer and DJ Toy Hernández (who has worked with Shakira, Café Tacuba, Manu Chao, Eminem, Cypress Hill, and many others) and keyboardist Mike Smith (who has worked with the Clash’s Paul Simenon in The Good, The Bad and The Queen, as well acting as musical director for MD for Africa Express, Monkey and Honest Jons Chop Up). 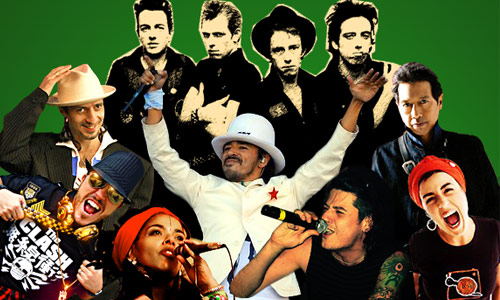