Shantel and his Bucovina Club Orkestar are back for their third Megaparty at Koko! Celebrating, in 2011, 10 years of the now legendary Bucovina Club that discovered the hottest sounds from the Balkans and took them to the clubs and festivals of the world from Ibiza to Istanbul, Shantel is the undisputed King of the vodka-fuelled Gypsy Beat and a turbo-charged Eurosound, and his UK exclusive show at Koko, on sale now, promises to be a party-to-remember where tickets will be in hot demand. With a background as a respected electronic dance producer on hip label K7, Shantel started playing clubs, parties and rock festivals around the world with a new sound that had its roots in Balkans – and, right from the start now ten years ago, drove crowds wild with ecstatic bliss. Whether he DJs or plays live with a band, Shantel has the knack for turning any venue into a vortex of pure euphoria, where the Balkan bounce takes over where punk pogoing left off, where everyone turns into an expert bellydancer on the spot, and love and good vibes are in the air – and his last two gigs at Koko were no different.

Now clocking up to 6 million views of his Youtube hit Disko Partizani, he’s brought the Balkans to clubland, and his work has inspired a whole generation of DJs who have broadened their horizons from house, techno or breakbeats to embrace this new sound. Disdainful of political borders, artificial musical categories and the generation gap, Shantel’s music has effectively straddled cultures and is equally at home at festivals such as the crazy Guca Brass Festival in Serbia, where in 2010 he performed together on stage with the legendary Boban and Marko Markovic Orkestar, to Glastonbury and Roskilde Festivals, and sees people of all ages dancing to his tunes. His remix of Mahala Rai Banda’s Mahalageasca was prominently used in the soundtrack of the Borat movie and for Koko he appears with his full live band that will be performing some of his classic numbers as well as plenty of new material in an evening you’ll wish didn’t have to end. On sale now! 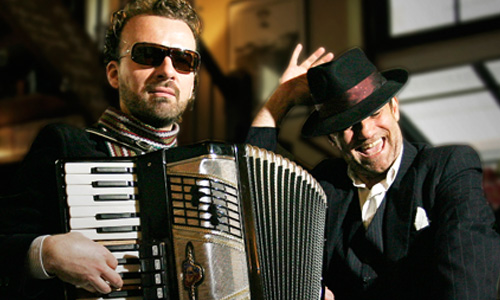