Seu Jorge, The coolest man on the planet and star of City of God and Wes Anderson’s Life Aquatic (where his acoustic Bowie covers won him many new fans) returns to The Roundhouse in London with his new project.

Seu Jorge and Almaz – drummer Pupillo and guitarist Lucio Maia from the legendary Nação Zumbi, with bassist and composer Antonio Pinto – came together to record a song for a Walter Salles film. They enjoyed the experience so much that they recorded an entire album, free of convention, of music that inspired them: they covered songs famous within the Brazilian diaspora and added a psychedelic samba to some classic American and European soul tunes.

For an audience that first met Jorge through his samba covers of David Bowie’s golden years in the Life Aquatic there are new treats in store with Almaz as Jorge’s chocolate baritone wraps around Roy Ayer’s Sunshine, Kraftwerk’s Das Model and Michael Jackson’s Rock With You. 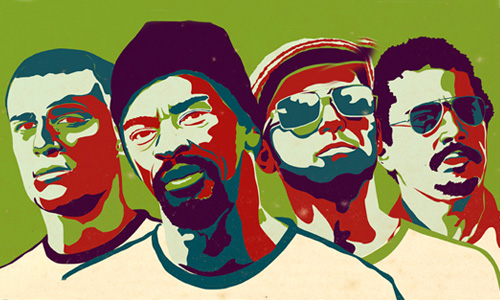