Tickets are £17 in advance and will be £19 on the door. There will be tickets available on the door.

Orquestra Imperial arose out the shared dream of a lot of shakers and movers on the Rio musician scene who all wanted to shake and move in a typical Brazilian traditional music orchestra with a “something else”. The group combines special names of the Carioca (from Rio de Janeiro) music scene in their different styles: Nina Becker singing sambas, Moreno Veloso  singing boleros and much more, besides great instrumentalists, such as the pop  producers Berna Ceppas (keyboards and samplers, he recently composed the soundtrack for the new Cirque Du Soleil spectacle, ‘Ovo’) & Kassin (bass), the guitar players Nelson Jacobina and Bartolo and Pedro Sá, percussionists Domenico, Stephan San Juan, Cesar Faria and Leo Monteiro and one of the biggest Brazilian music masters, legendary singer and drummer Mr Wilson das Neves, from the old guard of Brazilian samba and soul The Ipanemas.

Since their first show in the summer of 2002, the ORQUESTRA became one of the biggest sensations in the Carioca cultural scene. At their shows everyone dances and special guests have included great Brazilian names, like Caetano Veloso, Seu Jorge, Marisa Monte, Jorge Mautner, Fernanda Abreu, Ed Motta, and international stars as all such as Chrissie Hynde (who played with the group in a pre-carnival ball in 2006).

In 2006, the group performed at the Barbican as part of their Tropicália festival. In 2007, 5 years after its first appearance, the group launched its first CD, ‘Carnaval So Ano Que Vem’

In 2008, their European tour debut played some of the best summer festivals like Roskilde (Denmark) and Cartagena (Spain), making audiences unusually happy and dancing cheek to cheek.

Some names in the ORQUESTRA IMPERIAL:

MORENO VELOSO – Son of the great singer and composer Caetano Veloso, he released the album "Music for Typewriters" to great critical acclaim.

DOMENICO – Drummer and singer, he just launched his first album "Sincerely Hot" in Japan and in the US, in partnership with Moreno Veloso and the bass player and producer Kassin;

NELSON JACOBINA – Partner of Jorge Mautner, he is one of the most important musicians of the MPB (Brazilian Popular Music), composer of hits such as " Maracatu Atomico "; BERNA CEPPAS & KASSIN – both producers and great musicians. Besides playing in the orchestra (that they founded together), they work with important names of the Brazilian musical scene like Fernanda Abreu, Caetano Veloso and Adriana Calcanhoto. In the ORQUESTRA Berna takes care of of the synthesizers and percussions and Kassin plays the bass.

WILSON DAS NEVES – A Brazilian music legend, the greatest drummer with his unique style of singing sambas, he inspires the group with his funky-samba-style performing classical sambas and other Brazilian grooves. 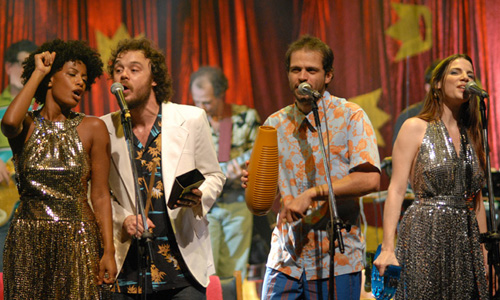