An extraordinary line-up of Buena Vista Social Club® stalwarts, together in an 11 piece band direct from Havana to present some of the finest Cuban music ever made.

This special concert takes audiences on a musical excursion from the original Buena Vista Social Club® recordings in 1996 up to the present day.  Each of these artists has an individual take on the gamut of Cuban Music, and they’ve each put their own stamp on son montunos, danzón, cha cha cha, boleros and Cuban jazz.

Having honed their skills over many years, their passion for the music has remains undiminished. Now after eleven years as the backbone of the Buena Vista Social Club® and as Ibrahim Ferrer’s live band and  recording Grammy winning albums, this esteemed group finally gets their chance to shine.

Guajiro Mirabal’s distinctive trumpet sound has accompanied virtually every Cuban star you could mention. His blistering tribute to the son conjuntos of the great Arsenio Rodriguéz, Buena Vista Social Club® Presents Guajiro Mirabal has been nominated for a Latin Grammy and its release was met with widespread praise. ‘Brilliant’ – New York Times.

Jesús ‘Aguaje’ Ramos‘ trombone has been an integral part of World Circuit’s Cuban recordings for the past decade, and both his playing and bandleading skills have made him a key feature on various Buena Vista tours. Aguaje’s debut solo album was recorded in Havana’s legendary EGREM studios and features the cream of Cuba’s musical talent.

Guitarist, pianist and organist Manual Galbán made his name with seminal Cuban doo-wop group Los Zafiros, and in recent years has appeared on a number of albums in the Buena Vista series. His duets album with Ry Cooder, Mambo Sinuendo won a Grammy in 2004.

Barbarito Torres on laud is well known for his contribution to both Afro Cuban All Stars and Buena Vista Social Club. 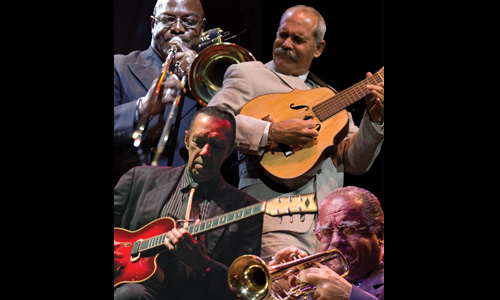