A triumphant return for Barcelona’s hip hop flamenkillo collective following their sold out Roundhouse debut in February. “Driven relentlessly by frenetic percussion thi is music that can’t fail to move you; live, the impressive presence of the dramatically coiffed Marina and her large band of musicians, video projections, a whirling light show and a a beatboxer/flamenco dancer face-off make for an evening of passion and spectacle.” Metro “An elemental force: a caravan of colour, sound and movement.” Straight No Chaser Ojos are joined onstage tonight by Senegalese rapper Faada Freddy from Daara J. Before Ojos there will be an opening set from Widescreen..an exciting new project put together by David Clark Allen – founder of Carmen, everybody’s favourite, Tony Visconti produced, seventies glam flamenco legends. Laurence Elliott-Potter’s joyous electro-dance beats and jazz-influenced keyboards, Charlotte Medcalf’s fiery violin and David 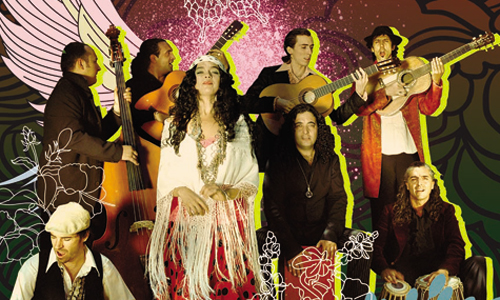