“One of the breakthrough sensations.” The Times “Worthy successor to her homeland’s melancholy matriarch.” Daily Telegraph “When her international career gets going this girl will fill stadiums.” The Independent The welcome return of Lura whose 2005 debut album Di Korpu Ku Alma won many admirers and whose new release M’bem di Fora will propel her to an even wider audience. Key to understanding her appeal is to see her onstage, where her warm, communicative manner, hip-swivelling dances and mellow voice make for a winning combination. Good looks and a very natural dress sense don’t seem to have hindered her, either. Perhaps most crucially, as part of a new wave of younger performers currently emerging from Cape Verde and its diaspora cultures in the US and Europe, Lura brings a fresh outsider perspective to the traditional music of her ancestral isles, looking beyond familiar morna and coladeira popularised worldwide over the last two decades. ‘In Cape Verde there are many more styles. There is the tabanka, the mazurca, the cola, S 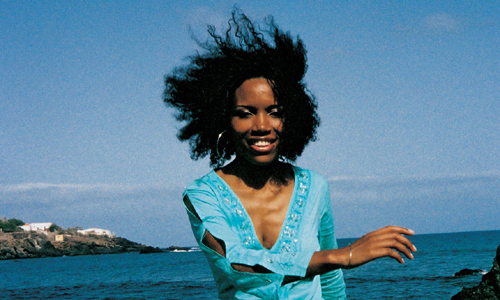