It’s back, bigger and badder than before. Blue Demon Jr flew into London this week to announce the alll new Lucha Future coming next June.

Lucha Future is brought to you by the people behind Lucha Libre London in 2008 and brings back the favourite luchadores of that season, including the leader of the evil rudos Blue Demon Jr, El Paso’s favourite lip-locking, exotico (cross- dressing) wrestler Cassandro and the acrobatic Magno. Lucha Future then shakes them up with a new younger, harder, faster team of gravity beaters, a dirty dozen of Mexico’s new breed of luchador, with live music and the promise of apocalyptic action. We will be introducing you to our new heroes over the coming months.

Lucha Future takes you on an exhilarating, foot-stamping, air-punching journey to the centre of a life-affirming struggle where rudos fight tecnicos and where good does not always triumph over evil. Altogether ¡Estupendamente!

“A spectacle that’s more akin to a rock concert cranked to 11 than your standard British wrestling event. Viva Lucha Libre.”
– Time Out.

“Ladies and gentlemen, senores and senoritas, the hour of masked phantoms, acrobatic heroics and lycra posturing is upon us! All hail the luchadores!” – Camden New Journal

“It’s always wise to expect the unexpected at the Roundhouse, but this time they’ve surpassed themselves.”– Ham & High 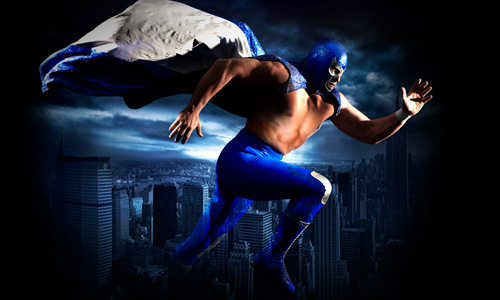