We apologise that, due to circumstances beyond our control, this show has been cancelled. Refunds are available from point of purchase.

Pura Fe, who was due to have played support for Hindi Zahra will now support Ana Moura at Union Chapel on 4th November.

Skimming through tango, arabesque and hip hop she combines influences from her childhood including the raï, châabi and Moroccan post-psychedelica as well as traditional Berber music and desert rock’n’roll, the Malian blues of Ali Farka Touré and sensual folk of Ismaël Lo. A fan of the Afro-America groove (Aretha Franklin, James Brown) she learned her chops doing backing vocals on hip-hop flavoured soul – realising eventually what she really wanted to do.

Intimate, poetic vibrations and beautifully written songs are wrapped with a velvety feline timbre as she skims through tango and arabesque with sprinkles of flamenco.

Totally gorgeous and relaxed – Hindi Zahra is the most exciting new voice in folk-soul.

‘Somewhere between her Moroccan roots and her life in Paris, Zahra lost track of her many musical influences: the result is mesmerizing elemental folk, a desert blues with an African/American twist.’  The Wire

presented in association with 2 For The Road 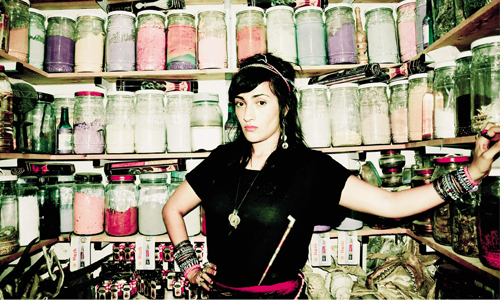