Doors 7pm – DJ Cal Jader (Movimentos) spinning some forthcoming La Linea runners and riders. Dolores and his Band – Aparelhagem play live from 9pm Followed by DJ set from DJ Dolores The London Latin Music Festival, coming in April, sets out its wares with a pre-launch party filled with good vibes direct from Recife – North East Brazil. Live set from Dolores and his band of global electronic and synchronically traditional regional musicians on vocals, guitars, brass and beats followed by a dj set from Dolores himself. Dolores is a mainstay of the inventive Recife scene and long time collaborator with Mangue Beat originators Chico Science and Nacao Zumbi. The man and the band play tonight to launch their new album 1Real out on Crammed Discs. “To describe Dolores’ music as Brazilian hip-hop , just doesn’t do justice to the degree of creativity on display. Maybe his beguiling mix of local street traditions and raw earthy beats is beyond labels. Like wandering around a rhythmically tropical dreamscape, where rapid-fire rap gives way to fat, funky horns over traditional percussion and sampled beats. Then you turn a corner and it’s all gentle female vocals, accordion and reggae or some carnivalesque mix of the forgotten brega rhythm and house.” Straight No Chaser “Intelligent, fun and funky.” Independent 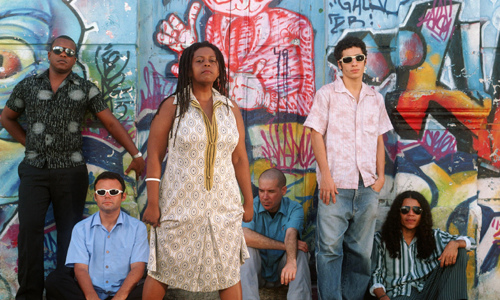