Since they revolutionized Urban Latino music five years ago with their breakthrough debut album, Calle 13 has always spoken to their fans loudly and clearly. Whether it was a dare to become a street-fighter, a shocking spin through a tango of sin, or call to the downtrodden to stand up for their rights, the game was the same.

Liberate your hips and your mind will follow. And although that message was sometimes misunderstood, the new Calle 13 album, “Entren Los Que Quieren,” (Everyone Is Welcome) makes clear that ringleaders René Pérez Joglar (Residente), and Eduardo José Cabra Martínez (Visitante) believe in a bigtent party.

‘The rapping is in Spanish; the music is from Puerto Rico, Macedonia and Nigeria; the sensibility is from Mars… They’re pop-savvy hitmakers with globe-trotting tastes and a riotous sense of humor… Spanish-speakers will love Residente’s witty raps, but you don’t need to know a word to grasp his message: a plea to bury geographic boundaries under an unstoppable groove.’ Rolling Stone 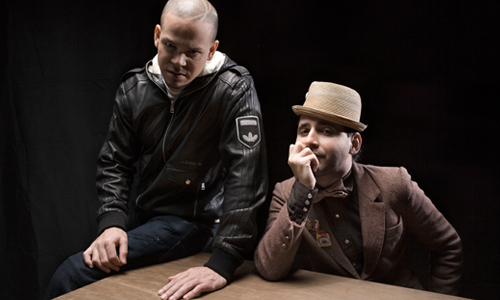