The UK debut for the last of the best, the galactic 20-piece Buenos Aires tango orquesta perform repertoire from tango’s golden age. Café de los Maestros is a loving showcase for the remaining stars of Argentinean tango from the 1940s and 1950s, just before the dramatic reinventions of Astor Piazzolla.  This glorious period for Tango produced many of the famous songs of the genre, at a time when the music was unambiguously for dancing and romancing, and the London show features stars such as Alberto Podesta (a hugely popular singer in the 1950s and 1960s), Luis Stazo (the bandoneonist of Sexteto Mayor), Fernando Suarez Paz (Piazzola’s violinist), singer Juan Carlos Godoy and Carlos Lazzari (bandoneonist and heir of the tradition of 1930s giant Juan D´Arienzo).The project has been lovingly assembled by Gustavo Santaolalla (Oscar winner for his scores for Babel and Brokeback Mountain and leader of Bajofondo Tango Club) and Gustavo Mozzi. 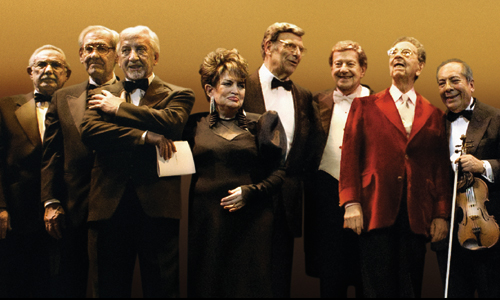