Following their summer triumphs supporting Blur in Hyde Park, on the main stage at Glastonbury, The Big Chill and I-Tunes Festivals – Amadou & Mariam play their last UK show of the year at the Forum in London’s swinging Kentish Town.

Come and celebrate the end of another amazing year for Malian superstars Amadou & Mariam.

Their genre busting album Welcome to Mali was hailed as their ‘big breakthrough album’  by the NME and praised by Q who said ‘you won’t find anything more authentic, genuine or ecstatic this side of Bamako.’ ****

Next month they will perform at the Nobel Peace Prize Concert in Oslo to honour Peace Prize Laureate Barack Obama.

New remixes of their standout track ‘Sabali’, featuring the beautiful ‘Sage x Grey’ remix by Theophilus London will be out soon on Because Music.

‘Amadou & Mariam are fantastic’ News of the World

‘Stands with the output of anybody on Atlantic, Motown or Stax’. Mojo 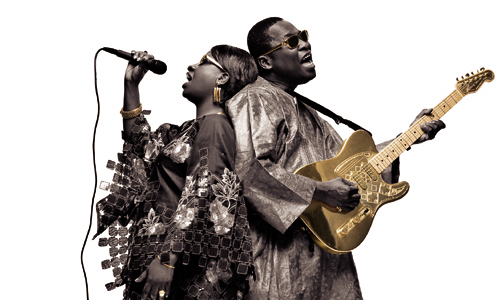