In June 2008, Alejandro Escovedo released his 9th solo album Real Animal. Produced by Tony Visconti (David Bowie, T.Rex, Thin Lizzy), Real Animal is a collective journey through Escovedo’s various musical incarnations from punk rock to string quintets and is as introspective as it is retrospective.

Escovedo was a founding member of the pioneering San Francisco-based punk band The Nuns in the mid-70’s. In the early 1980’s he moved to New York City, where he joined forces with fellow Bay Area punk scene veterans Chip and Tony Kinman in Rank & File, a band that forged the early 1980s country-punk sound that later became known as alternative country. After Rank & File relocated to Austin, Texas, Escovedo left the band and formed True Believers with his brother Javier. The critically acclaimed group disbanded in the late 1980s.

In 1992, Escovedo embarked on a solo career with his debut album Gravity. Subsequent solo albums have included Thirteen Years (1993), With These Hands (1996), More Miles than Money: Live 1994-1996 (1998), Bourbonitis Blues (1999), and A Man Under the Influence (2001). In the late 1990s, he began developing a dramatic work, based on his songs about his father, with the Los Angeles theater company About Productions. The resulting composition, By the Hand of the Father, premiered to critical acclaim in 2000 with Escovedo performing his songs as part of the production. His last album, The Boxing Mirror, released in 2006 was produced by John Cale and traces Escovedo’s journey from the brink of death at the hands of Hepatitis C to renewed wellness and artistic creativity.

Escovedo’s music has been widely lauded by the media, appearing in several high-profile publications including Rolling Stone, Vanity Fair, The New York Times, USA Today, PASTE, HARP and Entertainment Weekly. He was invited onstage by Bruce Springsteen to join The Boss and The E Street Band, playing Escovedo’s “Always A Friend” before a packed Toyota Center in Houston on April 14, 2008. He has also appeared on Conan O’Brian, The Today Show, The Tonight Show and performed at the Democratic National Convention in Denver to a wildly enthusiastic audience.

Alejandro is brother to Pete and Coke Escovedo of the original Santana band and uncle of Sheila E. In 2003 Alejandro was scheduled to appear at La Linea in London but the appearance was cancelled at the onset of his battle with Hepatitis C. Original 2003 tickets are not valid for this show, but if you produce one we’ll buy you a drink. 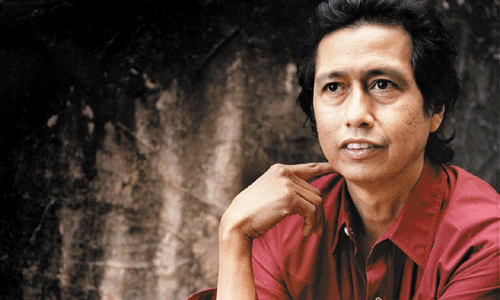