The brand new project from the makers of Buena Vista Social Club. The best of Cuban and Malian musicians combine in a thrilling event.

"One of the most transporting and life-affirming gigs of the year." The Arts Desk
"A beautifully balanced mix of two distinctive musical cultures coming vibrantly together." Q magazine
“The top table Afro-Cuban team-up that Buena Vista should have been” MOJO

AfroCubism was the original idea for Buena Vista Social Club. The original plan conceived in 1996 was to bring the foremost Cuban musicians and their Malian counterparts together to record in Havana and explore their shared musical history.  As it turned out the Malians couldn’t make it to Cuba so an exclusively Cuban album was recorded instead and thus began the legend that became the multi-million selling Buena Vista Social Club.

14 years later the 13 piece all-star cast of musicians including Buena Vista hero Eliades Ochoa, Djelimady Tounkara, Toumani Diabaté, Bassekou Kouyate and Kasse Mady Diabaté finally got together and recorded AfroCubism. Released in October last year the album has universally lived up to the high expectations and now this world class group of musicians comes together for one night at the Albert Hall.

Presented by Como No by arrangement with Musicians Incorporated. 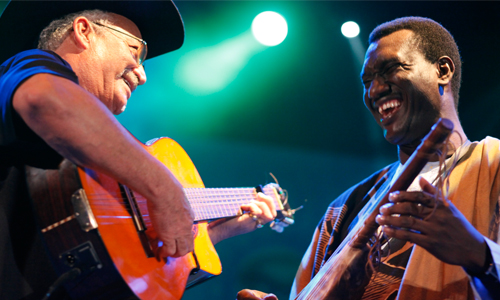